In order to gather the requirements a qualitative enquiry with 5 potential user was conducted. The participants were interviewed through a semi-structured protocol and were asked about their current usage of a mobile phones and their needs in relation to a hand-held device.


The interviews were analysed and the following requirements arose:


All colour combination was evaluated based on WCAG2–Level AA accessibility specifications by using the online Color Palette Accessibility Evaluator .
For size and spacing, the guidelines proposed by Jin et al.[1] were adopted. Hence, buttons designed for seniors who have low manual dexterity (measured using a Pegboard Test[2]) should have a larger button size, at least 19.05 mm and a larger spacing, from 6.35 mm to 12.7 mm.

Visibility of the system status


In order for the users to have an awareness of where they are throughout the interface [3] the system status was designed to be visible with the use of a persistent colour coding. Also, headings and icons were at every page of the interface.


Two types of feedback were used throughout the whole interface for enhancing the interaction. The first type was visual feedback in the form of highlighting. Every visual unit that encapsulates a link to an action is highlighted when touched.
The second, was tactile feedback (vibration) as a means of confirming the execution of each action.


The interface was designed to have the least possible depth in the menu levels. According to that guiding rule, all the tasks can be completed in one or two levels of depth in the navigation tree, as presented in Figure 2. The only exception was the Care centre which was accessible from all screens


In order to avoid miss-tapping, in order to perform each action a long press was required . Moreover, the hardware soft-keys (see Figure 3) were totally deactivated, because they can be easily touched when the user is focused on doing something else.


Autonomy and security are essential for seniors [4] and can be enhanced by helping them in emergency situations and inform their relatives in such occasions. Therefore, a “care centre” page is always accessible in the interface. This page handles emergency situations by allowing the user to call an ambulance or a relative . This is depicted as Level 0.5 in Figure 2.
The interface will also monitor daytime activity and if there is no activity for some time it will try to interact with the user. If the user does not respond a warning would be sent to a relative. This last feature is depicted in Figure 4. 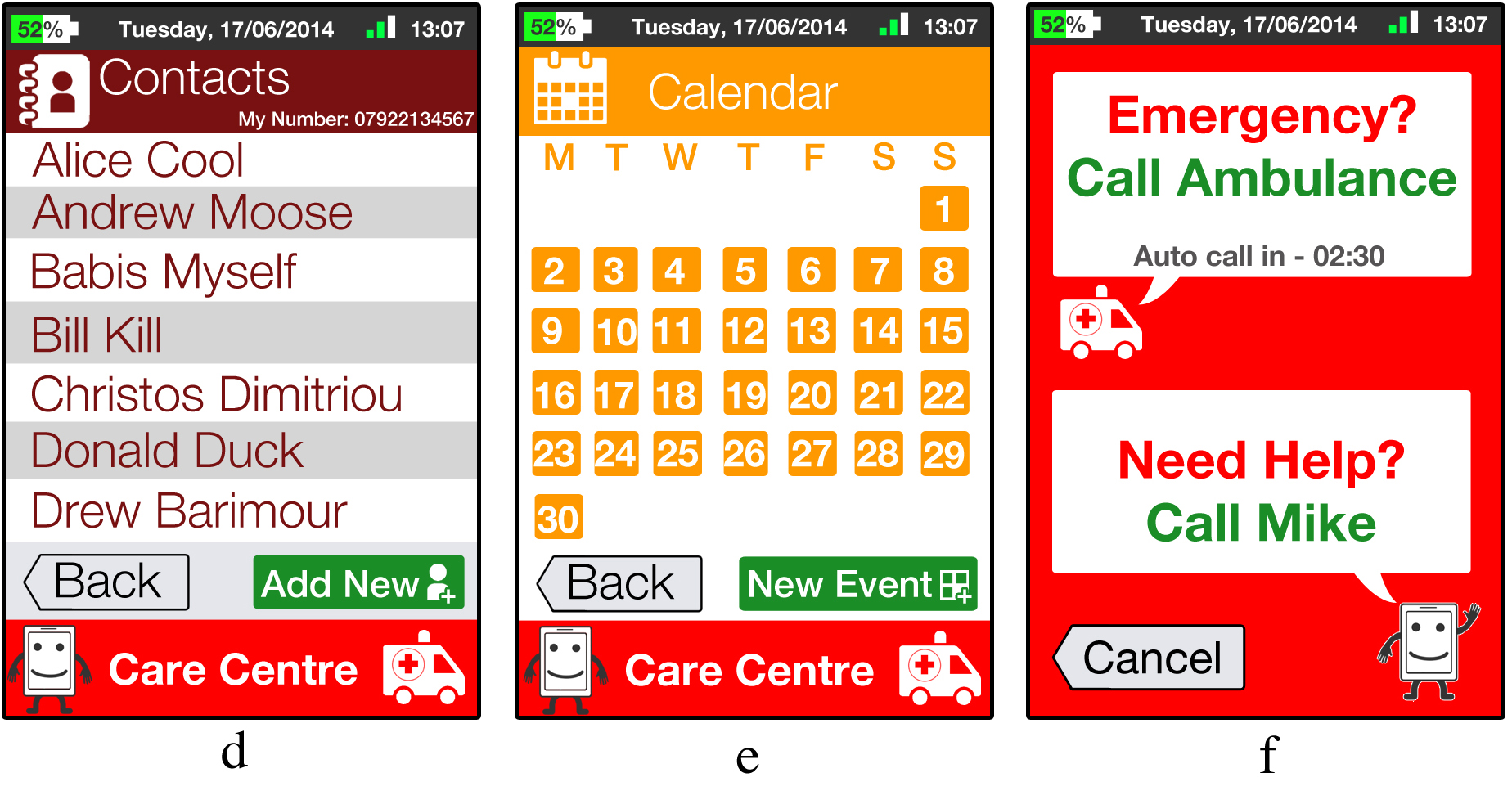 The initial prototypes were evaluated through a task-centred think aloud evaluation. 5 university students (between 22 and 32 years old) agreed to take part.
They were asked to complete 12 tasks and I was taking notes and asking them questions about their actions during the evaluation.
Many usability issues were found and redesigned based on the participants' feedback (Figure 6).
All the participants enjoyed interacting with the interface (Figure 7) and perceived it as useful for its target user group.

The final interface was implemented on the Android 4.0 platform. It was tested using a controlled experiment contrasting elderly and young participants. In total, twenty-two users participated.
The participants in the senior group were 3 females and 8 males with median age of 68; 10 were totally inexperienced with smart phones and 9 had a primary school education. On the other hand the young participants comprised 4 females and 7 males with median age of 29. All were smart-phone users and were university graduates. Participants in both groups were asked to carry out 12 tasks. For the evaluation, a Samsung Galaxy Ace 2, with a 3.8 inch display was used.
The tasks to be carried out were:


The purpose of this experiment was to understand if the elderly would be significantly less productive using the interface than the younger adults.
Even though the elderly were expected to be slower in all tasks (see Figure 7), due to their lack of experience with smartphones, I wanted to see whether they could achieve analogous results as the younger adults.

According to the results, the tasks 1, 2, 4, 6 and 7 were the tasks in which the elderly were less productive than the younger (considering their mean difference in task completion).
Figure 8 shows the average completion time for each task for both the user groups.

[4] A. Julio and C. Anton, “Universal access to mobile telephony as a way to enhance the autonomy of elderly people,” in Proceedings of the 2001 EC/NSF workshop on Universal accessibility of ubiquitous computing: providing for the elderly. ACM, 2001, pp. 93–99.