As part of my appointment as a Research Assistant at the University of Glasgow, I had to evaluate and redesign a mobile phone reminder tool for people with memory impairments - due to acquired brain injury. The main feature of the application was the ability to provide unsolicited prompts to users for the input of new reminders, in case they forgot to.
This application had been collaboratively designed by researchers in Human-Computer Interaction and Applied Neuropsychology. It was then developed for smartphones (Android & iPhone) by a contractor company.
My role at this project was to evaluate the application and redesign it according to the needs of the users. Also, I was responsible for communicate the designs and requirements to the contractor company and overlook the implementation in regards to usability. Lastly, I was responsible for exploring potential commercialisation routes and business cases for the application.

In order to evaluate the application and refine it we conducted an evaluation and a requirements gathering workshop with carers and people with memory impairments due to acquired brain injury.


This workshop was conducted in order to get a deeper understanding of the users. Even though previous work was conducted by the research team to understand the users, there were still insights missing on perceived usefulness of the application.
Hence, I conducted a workshop with people with acquired brain injury in order to understand their perceptions for such an app and to whom it might be useful.
During the workshop the participants were asked to create personas of people who might need such an application. Based on these personas, they were asked to provide feedback on the application's usecases and its perceived usefulness. Three workshops with one participant each were conducted.

The personas which were created during the workshops are presented in Figure 3. 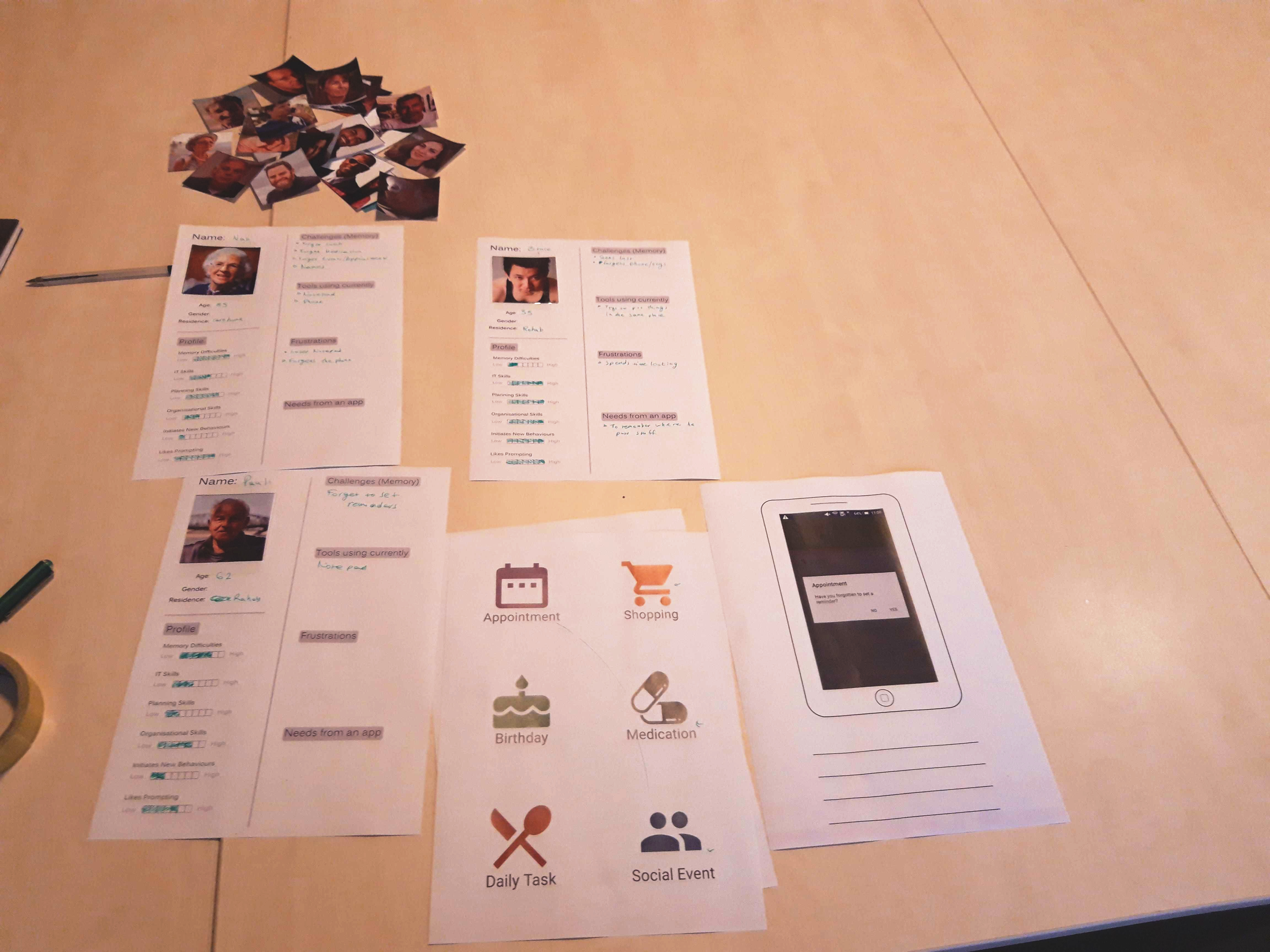 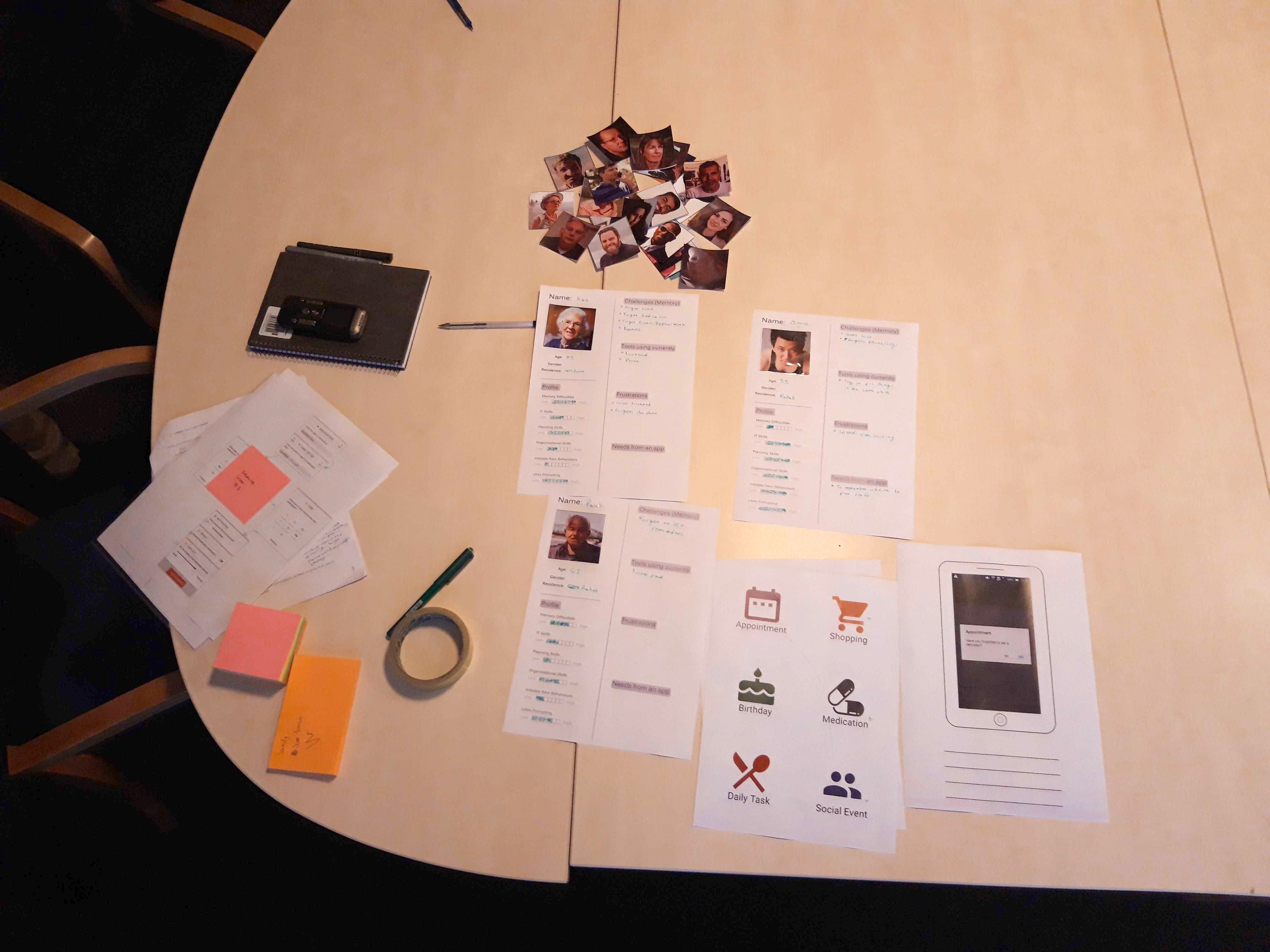 
At the evaluation workshop 8 carers attended took part. The workshop was divided into two sections. The first was be a pluralistic walkthrough of the app. The carers were split into two groups and both groups were presented with the printed use-case flow diagrams of the app. For each use-case they were be asked to annotate the prototypes based on the things they wanted ‘keep’, ‘lose’ or ‘change’. “Keep, lose, change” is an annotation technique for getting feedback on prototypes. After their choice on each use-case a discussion was held.
The second part of the workshop was a re-design phase where they were asked to change the things they didn’t like or they wanted to be changed. Due to time limitations this part was not conducted as planned (see “Refine” in Figure 3). Instead a general discussion, which lasted about 10 minutes, was held. The two groups were discussing about the things they had annotated, and suggested changes on the problematic parts of each use-case.
Moreover, the carers suggested new features for the app. The session was audio recorded. The audio recordings and the annotated use-case diagrams were analysed by the team. The outcome of the analysis was summarised in a list with all the problematic issues. The list was discussed between the members of the team, and it was sorted based on severity and feasibility of implementation. The selected issues were then presented to the development partners in order for them to implement them. 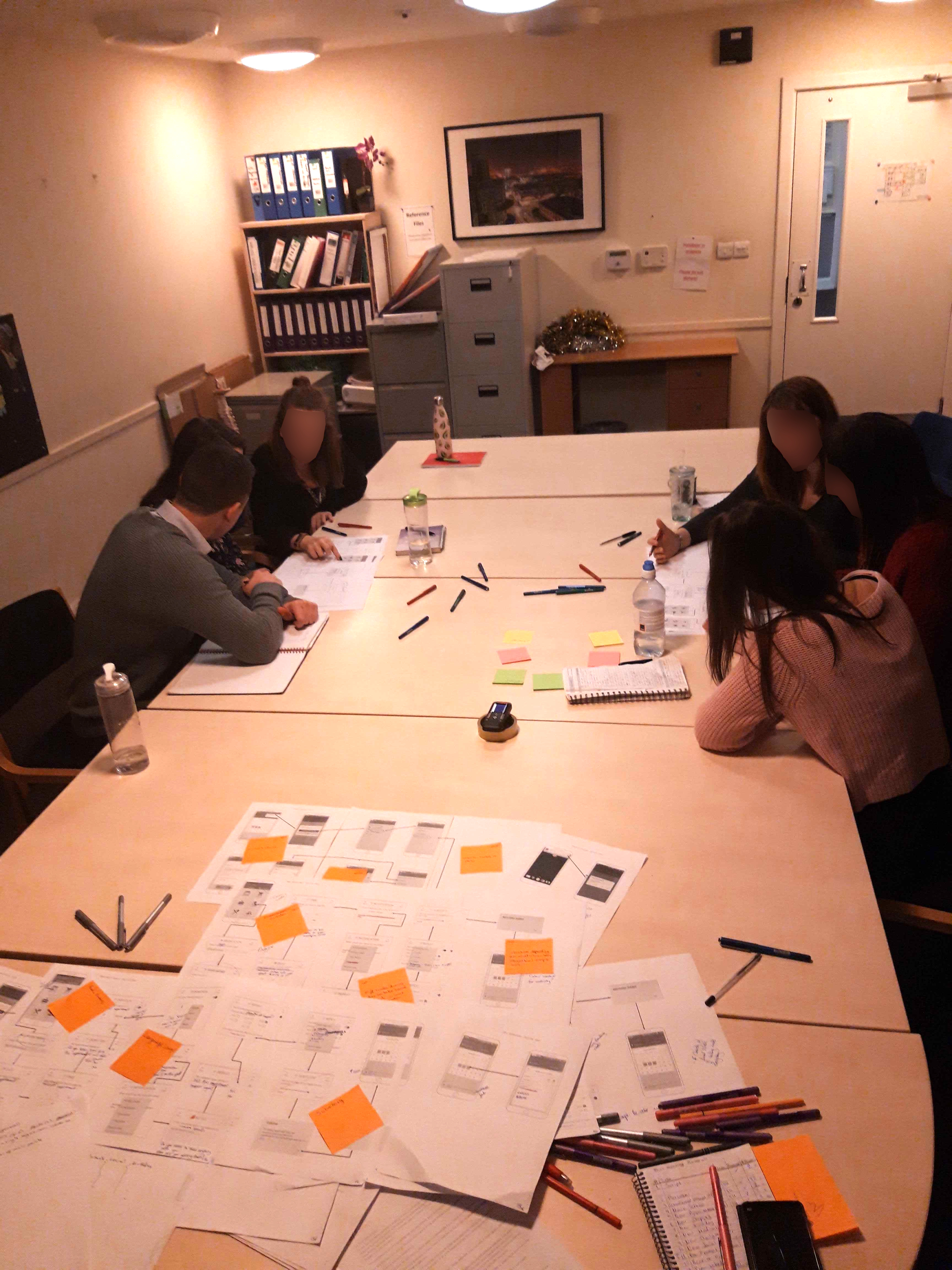 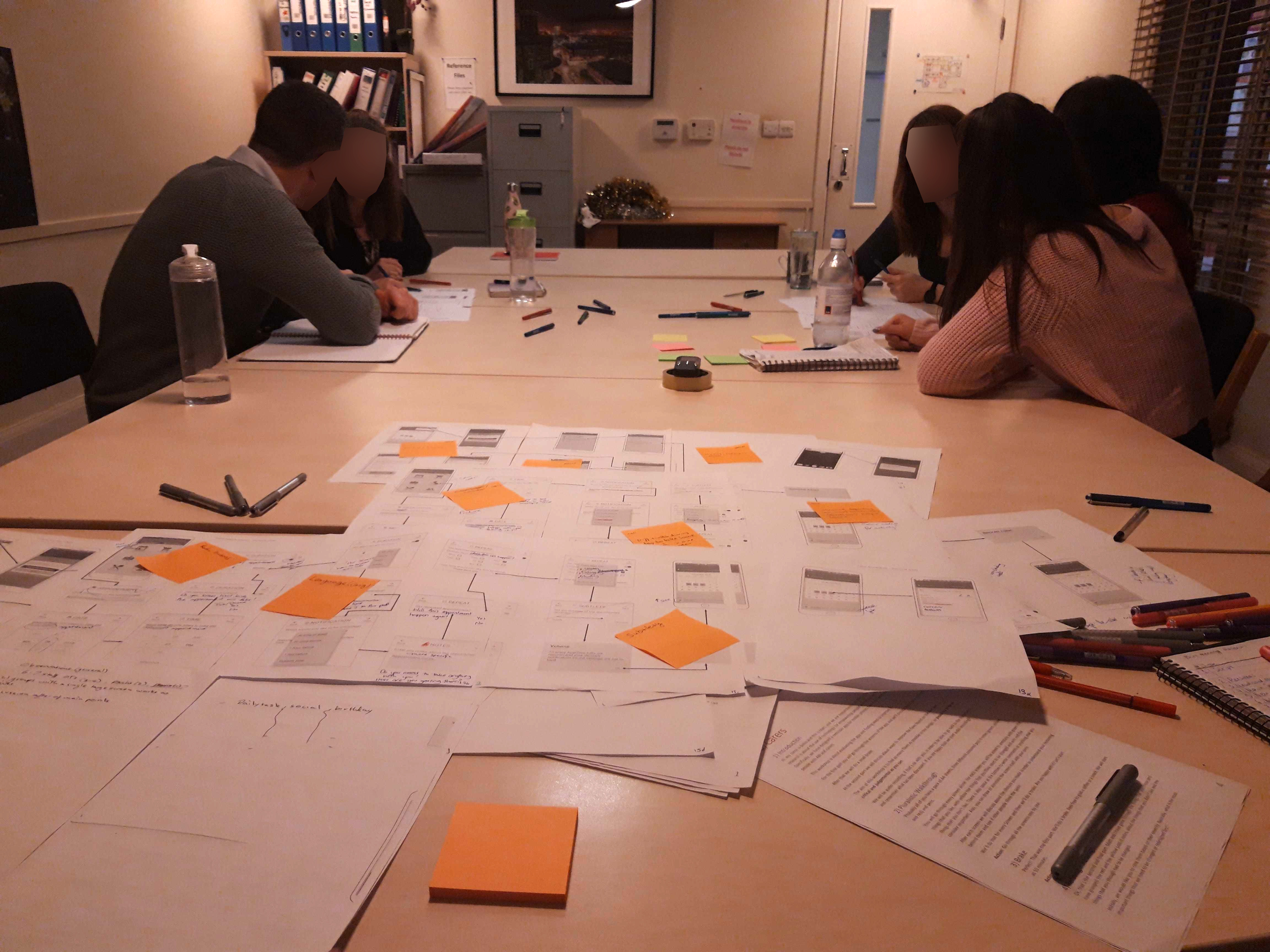 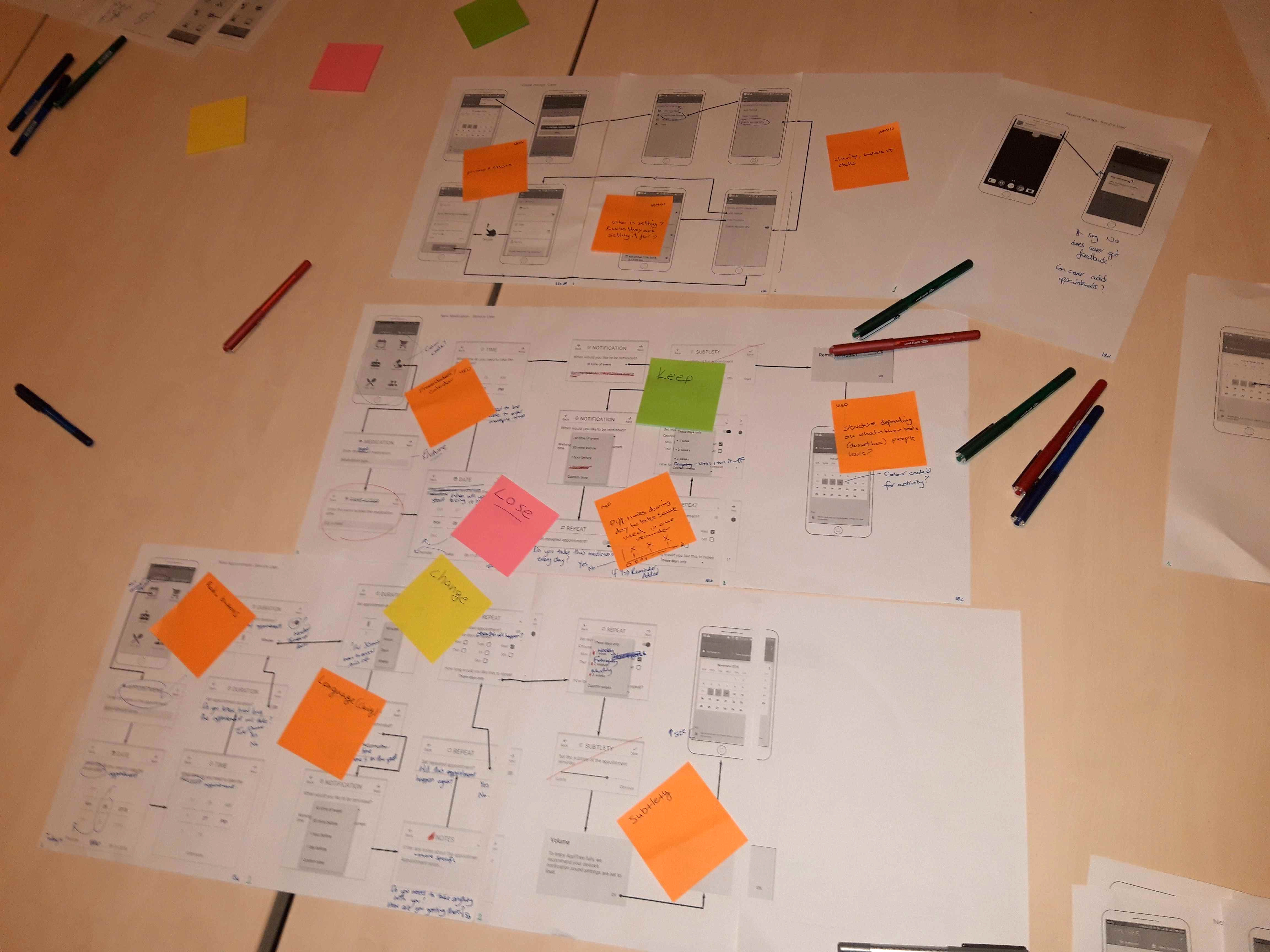 All the materials (personas, annotated paper prototypes and audio recordings) gathered during the workshops were analysed. A list of proposed changes on the designs was compiled and ordered according to their importance.
All the changes were translated to new prototypes in the form of annotated usecase flow diagrams (Figure 5). These diagrams were given to the IT contractor company and the final system was implemented according to them. 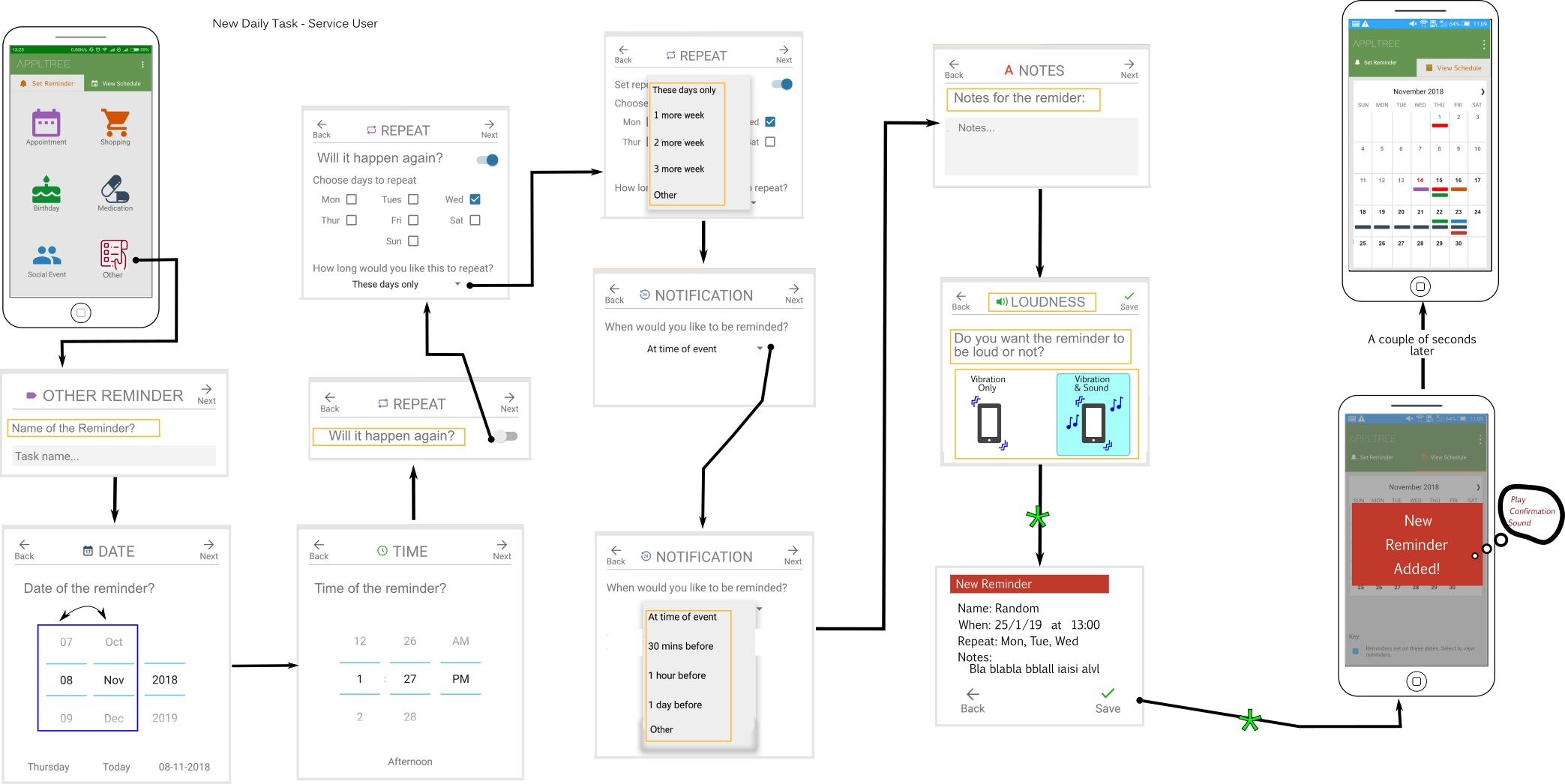 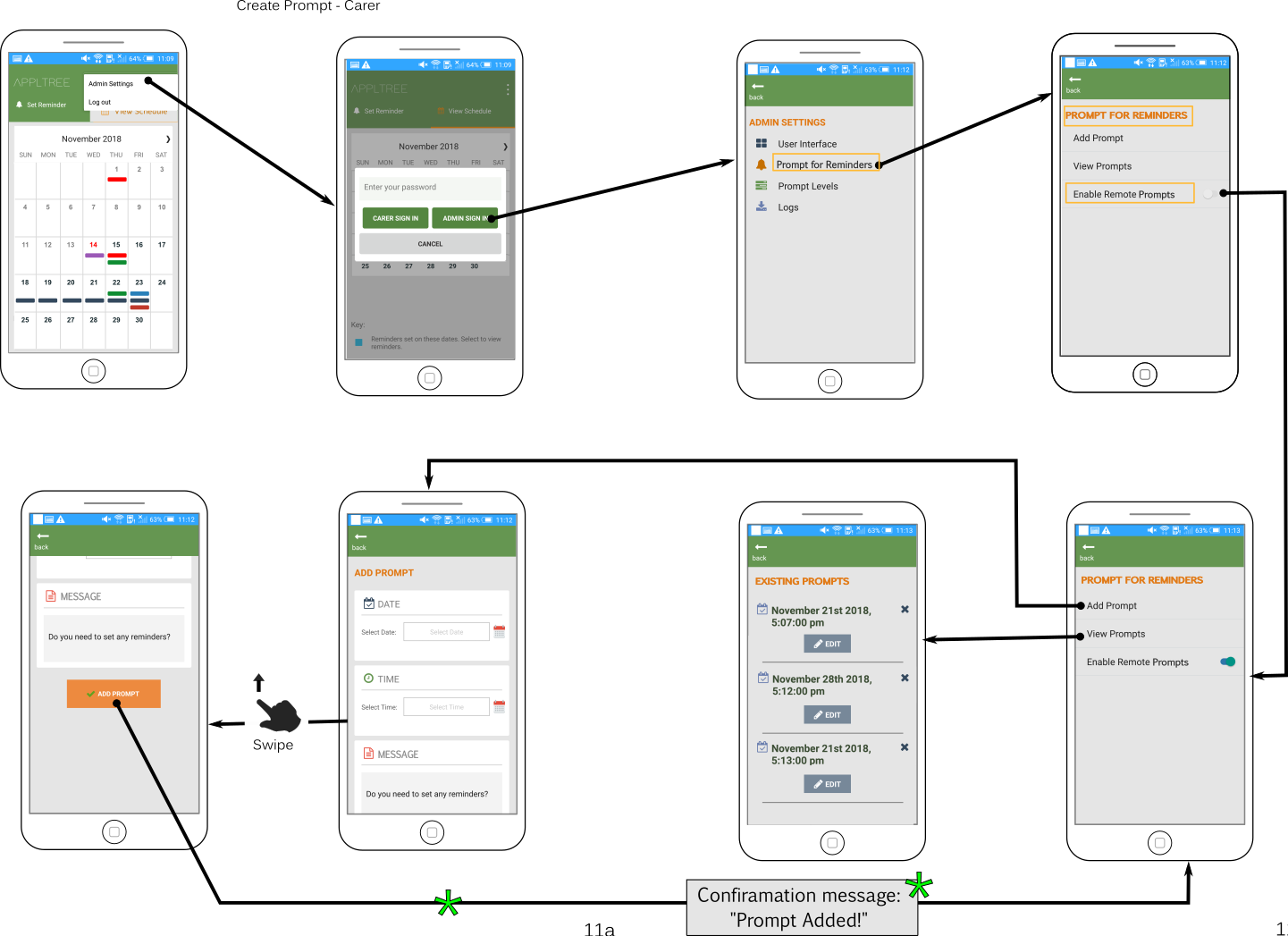